Towards Super-Connection is a mobile and modular installation and exists in a significant relationship with the place of its manifestation. It derives from a concept of quantum theory in which the quantum state of a particle is related to that of every other particle in that particular system. Towards Super-Connection explores through the site-specific installation, and both the featured drawings on paper and the lightbox, a dystopian present where nature sublimates itself to the needs of a system of structures and constructive forms: a changing system where the model exists as a code inherent in its parts. In the end, it is clear how Mark Cullen’s research is recurrent the spatial survey, and the representation of primigenial figures that are also evident in his site-specific installations – they seem like a 3D representation of these generative natural elements which are at the base of the Universe itself.

The exhibition features a modular installation of rods and geometric intersections derived from Buckminster Fuller’s geodetic design concepts.The structure composed of bamboo strips is susceptible to a conservation process where each element is carefully hand-laminated in PVC tape, followed by aluminium tape to give an aspect both futuristic and vernacular. This process perfectly follows the protection and conservation process of satellite components coated with a gold or aluminium film to protect them from cosmic radiation. This procedure represents for the artist both a meticulous meditative process and a gesture towards the safeguarding of a natural material such as bamboo by completely subsuming its essence: exploiting its form for a new esoteric purpose – that of making art.

The exhibition is generously supported by Culture Ireland, the Irish Embassy and The Arts Council of Ireland, and kindly hosted by the Museums of Genoa – Villa Croce and the Municipality of Genoa.

A vision of becoming cyborg is manifested with Metal Slug Seer, where a Guatarian machinic subjectivity is explored darkly in the guise of a mishappen member of a biomorphic priestly underclass, created to preside over ceremonies in service of an undying transhumanist elite.

Metal Slug Seer is sculptural entity as ‘seer’ for a technocratic transhumanist elite who seek to break with ‘deathist’ philosophies that acquiesce to finite human lifespans. Transhumanist members, such as Silicon Valley – tech billionaires Peter Thiel and Google’s Ray Kurzweil, strive to usher in a new age where humans achieve escape velocity from death, forever one step ahead of terminal decline. This is a vision for a new age of fuedalism, eternal. The Metal Slug Seer is a totemic cypher, a priest & master of proceedings for their gatherings as they meet and prepare for global climatic catastrophy with a nihilistic return to a new age of fuedalism, underpined on their longeviety and unfettered stateless capital.

The shadow side of technology where civilisation is being led by an untouchable technocratic elite is signalled with this totemic biomorphic sculpture. 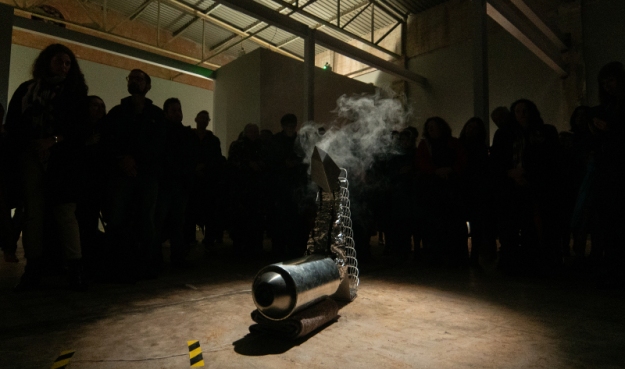 Metal Slug Seer is a biomorphic sculpture activated as a chamber to hold burning incense. It has a fan-motor connected to an asymmetric timer, allowing it to periodically bellow smoke out of its head.

A soundtrack recorded in the ‘lung’ of Biosphere 2, Arizona, and the Barrel Gallery of HDLU, Zagreb also accompanies this work during the lighting of incense ‘performance’.

TACTICAL MAGIC describes a process of reification by magic. As a festival and exhibition, it sets out to identify the links between art and magical practice. Archaeology tells us that the very roots of art are in magic. Prehistoric cave paintings, for example, were not merely decorative embellishments, they were acts of hunting magic intended to bring prey into life. It is this magical element, this resolute belief in reality building and bending through art, that forms the basis of TULCA 2019.

Expropriated from the art of communal ritual, magic was historically appropriated by organised religion into pedagogical representation, before being altogether disgraced by enlightened capitalism, which stated the genius of the artist as detached from God. Magic has survived, nonetheless, in forms of transgressive art practice that cast faith in art as a tool of reality. Hence new bridges between art and activism, art and health, and art and science are emerging alongside the enduring representational magic of paint, performance, and sculpture. These practices can be considered tactical insofar as they constitute a particular methodology employed towards a broader metaphysical end.

TACTICAL MAGIC finds its bearings in the resilient magical customs of the West of Ireland (in Galway the Hen’s Castle, Saint Augustine’s Well, and Knockma Hill). Yet it also positions itself in critical adjacency to perspectives that would enclose such practices in an exotic past, reproducible for the gaze of the tourist. Ireland is currently undergoing rapid secularisation, facilitated in part by the arrival of global capital. We are constructing a place where wells no longer heal, statues no longer weep, and giants no longer roam, yet the invisible hand of the market is granted deity-like infallibility. Against this timely and sensitive backdrop, TACTICAL MAGIC seeks to identify magic in the contemporary everyday, including in the rationalist discourses of science, technology, and the economy.

TACTICAL MAGIC therefore, asks, in a context of profit-positivism, whether art can create a political space for magical effects. Etymologically othered by religions, throughout history the term ‘magic’ has been flexibly applied to practices rejected by official discourse. This exhibition makes use of this flexibility to gather artistic practices of deviance, transcendence, illusion, ritual, embodiment, reification, redress, and trickery. Historically divergent disciplines and approaches will convene to share tactics that subvert the conventional binary of rationalism and irrationalism.

Slip slide inside this twin ccccoil
this labyrinttttttthine maze
Intestinal routes laaarggggge and small
devour time, and return
and seek out hidden
cccccchaaaaambers hiding portals
breached aaand secure from the wind.
three insertions: chequered patterns guide the eye
to vaaaanishing points
submerged into the earth, gggateways to Chthonic worlds
a plantttttation of infinite voids leading where else
inverted towers opening to an infinite underworld.

The most typical and idiosyncratic objects of beach holidays in our western windy islands – the coloured and stripped windbreaker – were employed to create the Lynders Mobile Home Park Maze.

The maze itself is based on a aperiodic binary tiling of the plane – a randomised process where a 50 cent coin decided the direction of each square on the mazes grid – either diagonally up or down. Be warned – once entering you may be lost for a considerable time…

Hidden within the maze are a series of chambers with sculptural inversions waiting to be discovered.

​Gillian Lawler’s Inversion I, II and III infuses the idea of place, organisation, relocation and transformation through different states of being. Submerged into the earth, Inversion I, II, and III reveal an opening between two worlds, a plantation of infinite voids, leading somewhere else. Recurring checker board motifs accentuate a definite but skewed anti-perspective, which herein add to a surreal, dreamlike sense of discomfort, where what appears to have been planned according to a perspectival logic is withheld and subverted.