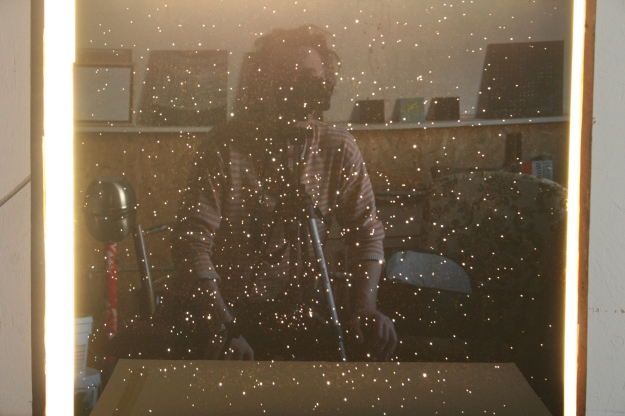 The first step is uncertain. Surrounded by darkness, all that is visible through a curtain of black plastic sheeting is a slim beam of light. You instinctually step towards this, pushing through into the next chamber and are immediately shocked back into sight. Florescent tubes line the wall, running the full length from floor to ceiling to create a stark corridor of light. The next chamber is again dark, what you can see overlaid by the pinks and greens of the afterimage of retinal burn. But yet another part in the curtain can be seen, and you step through into what is now total darkness. Your eyes are useless here, your body invisible. Inching your way forward, arms held forth in a mix of defence and exploration, you slowly find you are in a chamber identical to the preceding three. Eventually, you emerge directly into outer space, afloat somewhere in our galaxy.
A year is the time it takes our Earth to complete one revolution around the sun. It was one thousand, eight hundred and sixty-one revolutions ago Ptolomy set down his description of a geocentric astronomy in the Almagest. It was four hundred and sixty-six revolutions ago Polish astronomer Nicolaus Copernicus published On the Revolutions of Celestial Spheres, detailing his heliocentric thesis. It was three hundred and ninety-nine revolutions ago Italian mathematician Galileo Galilei released The Starry Messenger, publicly proclaiming his backing of the Copernican system based on telescopic observations. He was tried for heresy.1 Three hundred and twenty-seven revolutions later, British philosopher Olaf Stapledon published Star Maker, a science fiction novel that proposed a different form of celestial observation: his protagonist, sitting on a hillside contemplating the “tumultuous and bitter currents of the world”2 suddenly becomes unmoored from his body, a floating consciousness that explores the universe and the development of galaxies and civilizations far beyond our own. Fifty revolutions following this, Alan Moore moved Stapledon’s idea into the realm of horror and fantasy, with his comic book Swamp Thing, in a story arc that places the title character adrift in the cosmos, a leap “blind, into the void,”3 enabling a series of encounters with alien life forms and unknown evolutions of necessity. 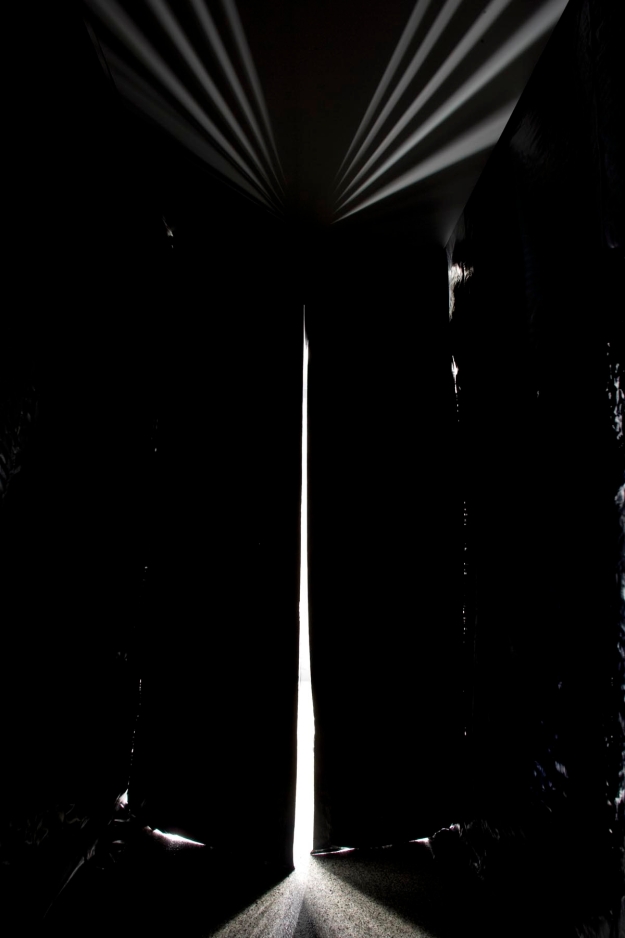 With ‘I See a Darkness II’, Mark Cullen takes us along this trajectory that associates observation, discovery, and the transformation of consciousness. The preceding rooms are a set of antechambers, preparatory physical alterations for our arrival in the main open space where we are dwarfed in an impossible panorama. Hundreds, thousands of stars. Pinpoints of light of varying sizes become clearer as our eyes adjust, a vision of celestial bodies sending light across billions of miles overwhelming all that we can take in. Swathed through the middle, we might recognise the haze of the Milky Way. Gradually emerging from the dark, floating like a silent monolith is a section of the axis mundi of Constantin Brancusi’s Endless Column (1938) as it passes through our section of space, disappearing up into the darkness of the room. As we grow slowly accustomed to this apparently vast cave of impenetrable black, Cullen’s effectively simple transformation of the glass window blinks and twinkles as it is coloured and animated by the people and objects just outside. Its thin membrane, denying us a ground-level view of the street outside, instead becomes a portal of cosmic proportions. We are placed amidst the stars, given a vantage point of the solar system we can never humanly achieve. The view stretched before us is a rough map based on telescopic observations, but the perspective that it grants splits us from any logical, grounded observation. Giving us an ‘out of body’ experience, while at the same time relying on science’s experiential approach, we are made intimately aware of our bodies at the same time as losing them.

Stapledon and Moore’s “ is in one sense the fulfilment of a set of Enlightenment ideals. Following the Copernican revolution, science purported a distanced, objective viewpoint from which all could be accurately surveyed. The act of looking, at the heart of the scientific method and its way of knowing, could be done dispassionately and reliably; this belief still continues. Cullen doubles back on this act, interrogating the methods and means of science to its own rigorous gaze. What he shows us are images and entities, machines and discoveries that have been used to present us with scientific facts: recorded supernovas, observatories, the Large Hadron Collider at CERN. By employing the means of visual art to deliver these – his use of the mediums of painting, sculpture, and light; all by necessity critically subjected to the act of seeing—he opens the rigid epistemology to a creative demand, to question how we are seeing to come to know what we are seeing.

Windows with edge of hanging Infinte Column on right. 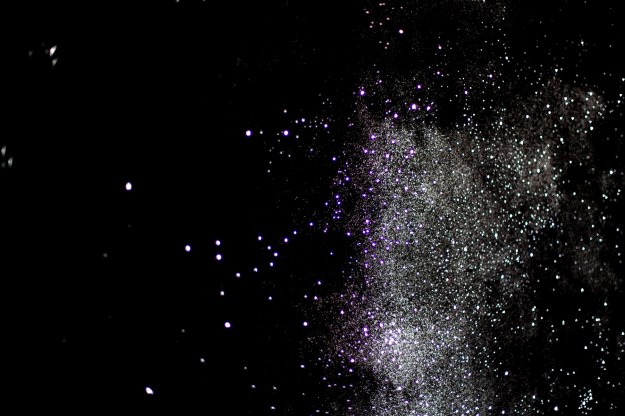 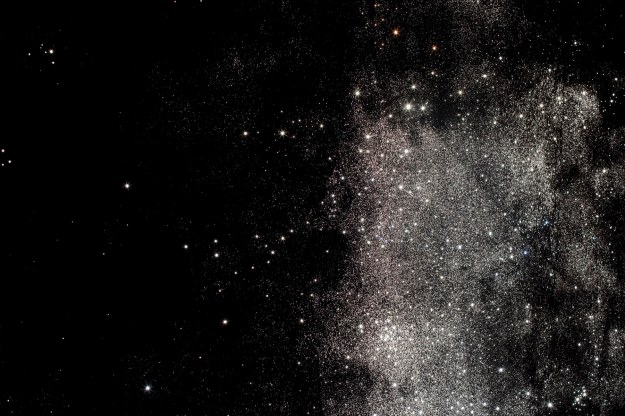 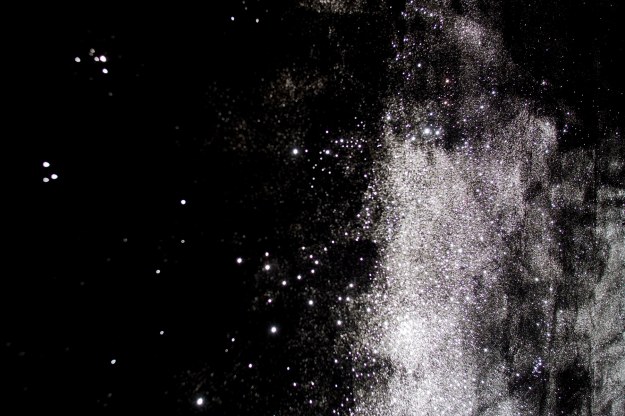 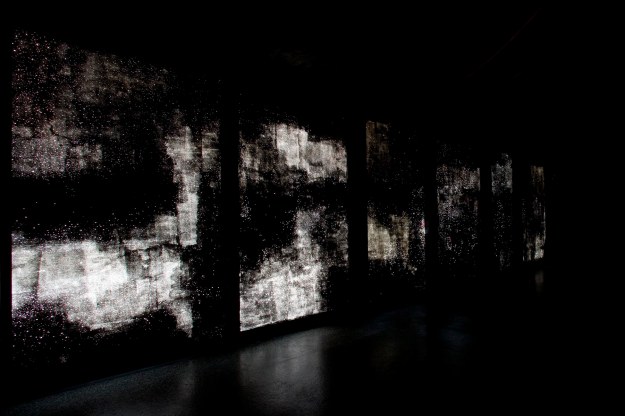 For Cullen, science is a pervasive paradigm and a powerful metaphor, but one that can and must be re-interpreted to our own subjectivities. ‘I See a Darkness II’ creates a disembodied consciousness to pose an encounter with our known universe as something alien and unknown. Within that encounter is the suggestion of different paradigms impossible to comprehend from our human vantage point, a latent re-assessment of the particular historical strands that our science has followed, and the idiosyncratic habits and knowledge that it has formed. As we inevitably leave the gallery and land back on Earth, it also works in ways more poetically mundane, invoking a re-appraisal of our own intra-species relationships and our relative significance in the universe. As Stapledon’s cosmic traveller awakes, returned from his voyage to terrestrial reality, he finds “two lights for guidance. The first, our little glowing atom of community, with all that it signifies. The second, the cold light of the stars, symbol of the hypercosmical reality, with its crystal ecstasy.”5 Ibid., p. 262.] Cullen places us with wonder and unease between the two.