Limerick City Gallery of Art Series 1 Exhibition text 008
‘Difference Engine: Accumulator III’
Difference Engine is a model of autonomous curation by artists Gillian Lawler, Wendy Judge, Jessica Foley and Mark Cullen that started in 2009. They produce a series of evolving exhibitions where they ‘manifest’ their work together, to each other, and in response to invited collaborators. For ‘Accumulator’, the catalyst was Gordon Cheung’s portrait of Charles Babbage, Babbage and the latter’s observation that “Jamming is a form of error detection”. The artists take the two possible meanings of ‘jamming’, saturation and free style improvisation, as a form of exhibition.

In the last scene of Lars Von Trier’s Melancholia, Justine builds with her nephew a ‘magic cave’ as a shelter from the oncoming Armageddon. The ‘cave’ is a tepee-type assemblage of sticks, not unlike the large structure made of fluorescent tubes in the Herbert Gallery 1. For Justified Ancients exaggerated Sublimity, Cullen combines an icon of modern architecture with a primitive structure to conjure a magic space. The reflection of the fluorescent light in the glass protection of the small scale drawings and watercolours of Lawler’s series Untitled I, II and III, draws them into its circle. In turn, the delicate drawings hovers between geometry and architecture, abstraction and possible function.

In the Herbert Gallery 2 there are works by Judge, Foley and Cullen, which feed off and possibly disrupt each other through their very distinction. Foley’s Super 8 film Wallpaper In formation projected on the back of a small screen, takes on the story of a Russian woman who became a genius from having her bedroom’s wall covered with pages from a math book. Only in the film the attempt at covering a room with algebraic figures do not go according to plan, with the paper constantly slipping and folding. Mathematical figures gives a comforting sense of control, there are no threatening contingencies – even irrationality is controlled somehow with its own numeric domain. Thus the attempt, however vain, to control the one room in sheltering it from the world’s chaos with mathematic symbols has powerful resonances. This train of thoughts leads the eye perhaps astray on Judge’s play with scale in Travel Sized View with Early Warning Radar Facility. The ad hoc installation of foam, wood, concrete, plasticene, and tripod stand come together when we focus on the concentrated lighted area designated by the reverse binoculars position. Just there looking through the reverse lens we have a trompe-l’oeil of a radar facility sited in a mountainous landscape; just there the chaos aligns to make sense. The works in the room share similar concentrated dimensions, with Cullen’s light box Toward Super Connection mirroring Foley’s screen, and its circumscribed drawing echoing Judge’s spot lights. 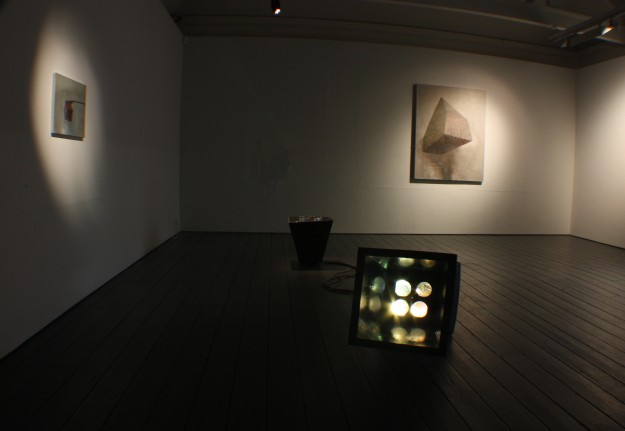 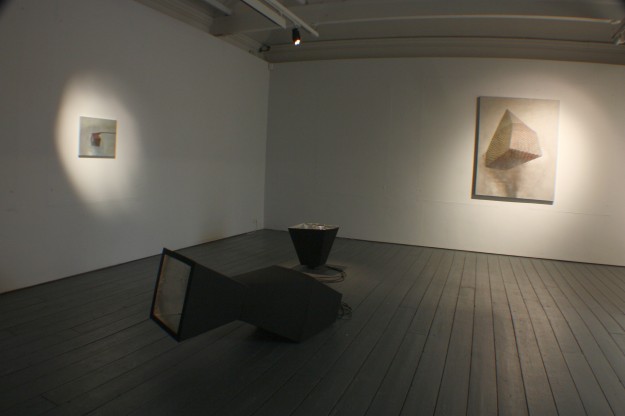 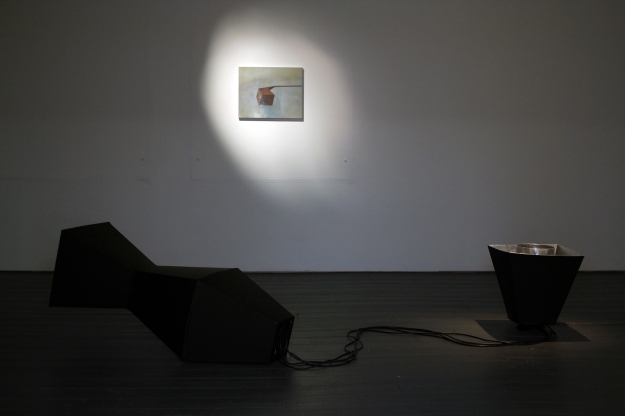 The Carnegie gallery is a combination of works by Judge, Cullen and Lawler with Cheung’s Four Rider (Red) setting the tone. Cheung’s is a somewhat hypnotic video animation projected on a screen in the middle of the gallery: a slowed-down loop of a cowboy riding a bull over a composite background of waves, rolling clouds and mountain peaks in acid saturated colours; on the audio, static noise and guitar accords from The Door’s The End. The slow motion movement and the guitar give an apocalyptic atmosphere to the room. The Door’s sound is picked up by the humming sound of an electric fan’s pals while its projected shadow beats the empty skies over a sink hole in Cullen and Lawler’s No Easy Bird Flight Remains. Lawler’s surrealist architectural extrapolations over smoky devastated areas take on an ominous presence. Judge’s scattered Meteorite Field adds to the end-of-the-world’s impression.

In the text accompanying the exhibition, the artists refer to Felix Guattari’s understanding of subjectivity. In his clinical and philosophical work, Felix Guattari has constantly challenged an individualistic model of subjectivity, exploring its production through collective, machinic or animal combinations. Difference Engine’s evolving exhibition series offers an intriguing model of combination of differences that produce new arrangements and new subjects every time it is produced.