Blackflash: A disorientating condition when an occurrence from a fictional past intercedes in the mind of the present, perceived as a real event, or as a continuum of happening. An instance of remembering an experience that may or may not have happened when one has ‘blacked out’, lost consciousness, or when one has disconnected from ones own subjectivity, through the result of an immersive experience in an alternate reality, an hallucination, or, such as a through a ‘letting go’ engagement with fiction, with music or with ones daydreams. An uncomfortable ‘snap back’ effect may be experienced as one returns to a pre-blackflash state. 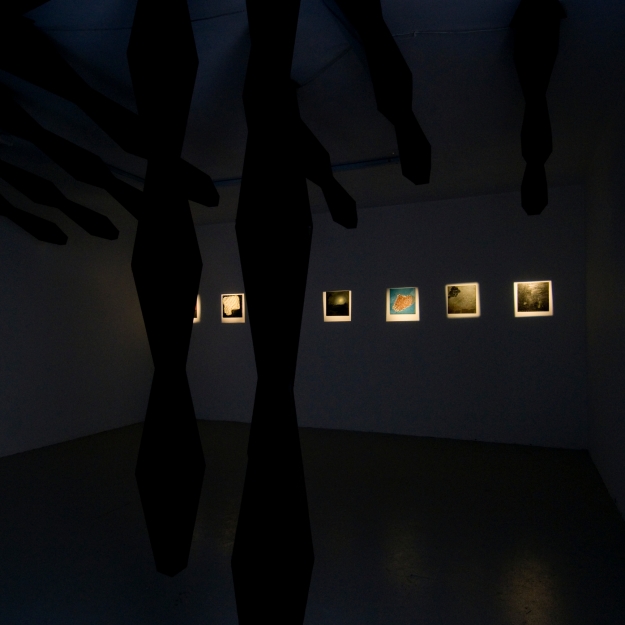 In 17th and 18th century painting, Chiaroscuro was a technique in which contrasting areas of light and dark paint would allow for the modelling of figures, and bring the protagonists of the scene into stark focus. Much more than a mere optical or technical device, it also served a metaphoric and symbolic function – dark and light being synonymous with good and evil, knowledge and ignorance. One only has to think of where the light falls in Caravaggio’s Taking of Christ (1602); or which figure is left in shadow in Leonardo’s Last Supper (1498) to see how fundamental it is to our understanding and reading of painting.

Mark Cullen’s recent work draws on some of these histories in Blackflash shown as part of Tulca 2008. The title ‘Blackflash’, suggests a scene which has momentarily been flooded with black light – but is that just darkness? Is darkness merely the absence of light, or like dark matter, does it have its own character or existence? Dark and Light, Chaos and Cosmos, are some of the fundamental dialectics with which Cullen engages. In mythical eschatology, the order which was created out of chaos at the beginning of time occurs again at the end of time. Universal laws and the pure order of things are established as the cosmos, but eventually law and order decay and degenerate into chaos. Cullen’s Blackflash presents an installation of nine paintings and suspended sculptural objects in a darkened space more typical of film and video presentations than an exhibition of paintings, but as Mark Garry points out in his essay on Cosmic Annihilator, ‘the prevailing references in … Cullen’s work are cinematic’. Indeed the current work resonates strongly with the sense of a cinematic moment stilled in time, specifically that moment in Sci-Fi B movies in which the alien space-ship first appears in the sky to the shock and consternation of the earthlings below. Indeed the publicity poster for Don Siegel’s Invasion of the Body Snatchers (1956) features searchlights descending from the sky strongly reminiscent of Cullen’s sculptural structures.

Paul Valery tells us that ‘the eyes are organs of asking’; physiologically, sight is based on the action of visible light falling on the retina – yet Cullen’s ‘alien’ structures invert this act of seeing; casting light rather than absorbing it. He has said that this work concerns itself with the ‘modernist utopian project’, and this is a vision of a macrocosm in which the future of the very act of seeing appears to be subject to deconstruction.

While the leap from mythical eschatology to B-Movies might appear excessive, it does in some small way, point to manner in which Cullen collates diverse references within a non-hierarchical structure. He weaves histories both sculptural and painterly; historical and contemporary; through his juxtaposition of simply made oil paintings alongside objects which formally might appear to reference 1960s minimal sculpture. Cullen’s attempt to document the night skies links his work to that of artists such as diverse as Van Gogh, Vija Celmins or Jimmy Durham; yet his contingent visualisation of an epic future in which biospheres float in clouds in the sky would place his endeavour within the framework of Kubrick’s 2001: A Space Odyssey, (1968). Unlike Kubrick however, Cullen does not fix a time frame on his vision, neither does he envision a Hal-induced apocalypse. Cullen presents images of future systems of life floating between the clouds and the stars, biospheres which would suggest that life in darkness in not an oxymoron, but neither is it a vision of life in the Platonic shadows. These are hopeful images of future utopias – complex ecological structures articulating new possibilities of existence. Terrestrial activity is continuing even if it would appear to concern itself primarily with looking at the stars – this is hardly surprising considering the astonishing new structures apparent in the night skies. His paintings describe constellations ordered in perfect grids almost like an Agnes Martin drawing – but of course Martin’s drawings are never ‘perfect’, the frailty of the human hand, combined with the bumps and flaws in the canvas hamper her own quest for an ordered image. The beauty of Martin’s work is almost certainly contained within these moments of failure – and perhaps it is also here that we can read Cullen’s work. He has lofty ambitions for mankind, yet it is man’s capacity both for destruction as well as regeneration which defines us. As in the study of astronomy and particle physics the terms ‘dark matter’ and ‘dark energy’ are the current measure of human ignorance – much like the term ‘terra incognita’ on medieval maps. Blackflash suggests that perhaps it is here in the obscured rather than the enlightened that the future lies.

Seán Kissane is Curator of Exhibitions at the Irish Museum of Modern Art. 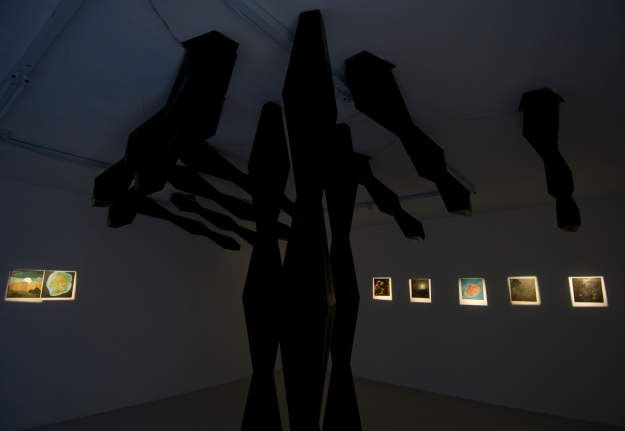 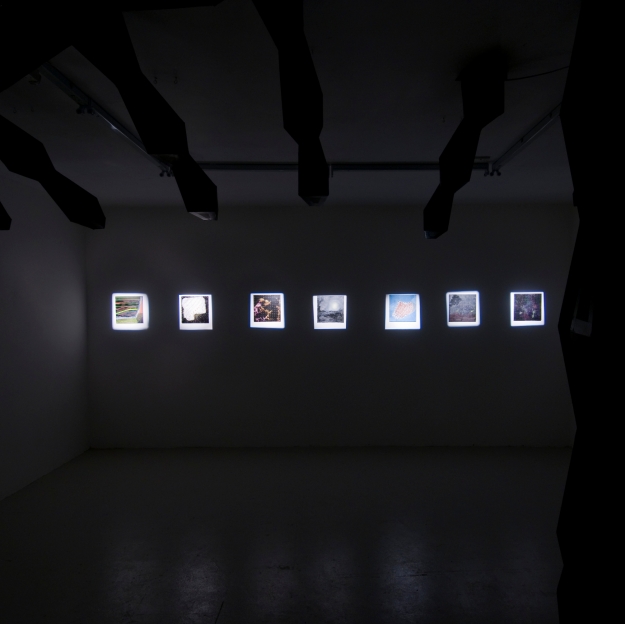